TORONTO – In a Canadian first, a team from Mount Sinai Hospital and The Hospital for Sick Children (SickKids) has repaired a form of spina bifida in a fetus at 25 weeks gestation. The baby’s mother, Romeila Son, recovered very well from surgery, and a bouncing baby girl, Eiko, weighing 2.45 kg, was born on August 19 at 36 weeks gestation at Mount Sinai Hospital. Since her birth, Eiko has needed no further intervention for this usually debilitating condition. This is the first case in Canada where the mother has not had to travel to the United States for this specialized surgery.

Dr. Greg Ryan heads Canada’s largest and most experienced fetal therapy program at Mount Sinai Hospital and Dr. James Drake heads Canada’s largest and most established neurosurgical centre for the postnatal repair of spina bifida at SickKids. Working in collaboration with colleagues from Vanderbilt University in Nashville who pioneered the procedure, a team of 24 clinicians led by Drs. Ryan and Drake successfully carried out the 2.5 hour in-utero procedure at Mount Sinai on June 4, 2017.

Myelomeningocele is a form of spina bifida, affecting approximately 120-150 babies in Canada each year. It is caused when the spinal column fails to close early in fetal development, causing permanent damage to the baby’s spinal cord and nervous system.

The Management of Myelomeningocele Study (MOMS), a groundbreaking trial published by Vanderbilt University, Children’s Hospital of Philadelphia and the University of California, San Francisco, in the New England Journal of Medicine in 2011, showed that, in babies who underwent the in-utero procedure:

Consequently, the Society of Obstetrics and Gynaecologists of Canada (SOGC) now mandates that any pregnant woman whose fetus has spina bifida must be counselled about this treatment option.

How it was done 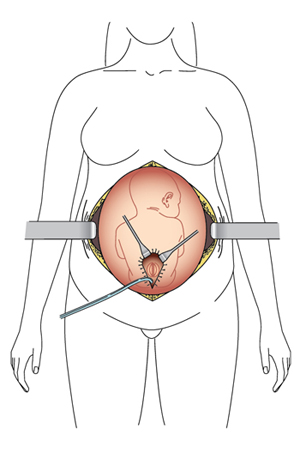 Mount Sinai Hospital and SickKids recently collaborated on another in-utero surgical first, repairing a congenital heart defect called transposition of the great arteries, in May, 2017. The team from SickKids and Mount Sinai Hospital is Canada’s only provider of fetal surgery.

“I am extremely proud of the collaboration between Mount Sinai Hospital and SickKids – which has resulted in a terrific outcome for this baby girl. Although fetal surgery will not be appropriate for all fetuses with spina bifida, it is extremely encouraging that, for some, it may preserve neuromotor function, reverse brain herniation and reduce their need for a brain shunt. However, it also entails some maternal and fetal risks, particularly that of premature labour, which must be carefully balanced. Having this kind of clinical capacity here in Ontario will really change the range of options available to parents who have been given a diagnosis of spina bifida during pregnancy,” says Dr. Greg Ryan, head of the fetal medicine program at Mount Sinai Hospital, part of the Frances Bloomberg Centre for Women’s and Infants’ Health.

“We regularly see children who have been affected by spina bifida at SickKids. It is my hope that our capacity to perform this in-utero surgery here in Toronto will mean that we can optimize their clinical outcomes, and reduce the degree of medical challenges these children will face,” says Dr. James Drake, head of the division of neurosurgery and senior associate scientist at SickKids.

“I would like to congratulate everyone at Mount Sinai Hospital and SickKids who teamed up to perform Canada’s first in-utero spina bifida surgery. The incredible story of baby Eiko’s journey into this world shines a bright light on our world-class health care professionals. They're talented, innovative, and making life better for people in this province — starting even before they’re born. Congratulations to little Eiko and her family. I wish them a healthy, happy future.” Honourable Kathleen Wynne, Premier of Ontario.