TORONTO - Julie and Paul Devigne’s lives were turned upside down in November 2020 when they learned their four-month-old son, Félix, had cancer. Less than three months later, Félix was undergoing major surgery at The Hospital for Sick Children (SickKids) to remove a rapidly growing tumour that had taken over most of his abdomen. Through a collaboration between SickKids and Health Sciences Centre (HSC) Winnipeg’s Child Health program, the tumour that some experts had deemed ‘inoperable’ was removed and Félix is now safely home.

Julie and Paul welcomed Félix, their first child, in July 2020. Despite entering the world amid a pandemic, the first few months of Félix’s life at home in Winnipeg were relatively normal. Around four months of age, though, Félix became unusually cranky and wouldn’t let his parents put him down. Julie brought Félix to the children’s emergency department at HSC Winnipeg for a suspected urinary tract infection. They wouldn’t go home again for four months.

“We were never expecting a tumour, let alone a cancerous one,” says Julie. “Receiving that kind of news is devastating. Paul and I leaned heavily on one another, our community and the incredible support provided by the Winnipeg team.”

Félix was diagnosed with rhabdomyosarcoma

Rhabdomyosarcoma is a rare type of cancer that develops in soft tissues and usually affects children. In Félix’s case, the tumour arose from his bladder and was starting to displace his other organs.

Dr. Sapna Oberoi, paediatric oncologist at CancerCare Manitoba and the Department of Pediatrics and Child Health at the University of Manitoba, led Félix’s Winnipeg oncology team. After several months of intensive chemotherapy, Félix’s tumour continued to grow rapidly. A repeat biopsy revealed the tumour cells were maturing in response to chemotherapy. The pressure from the fast-growing tumour was compromising the function of organs in the abdomen and Félix’s lungs. To manage these complications, Félix was admitted to the paediatric intensive care unit (PICU).

“We were running out of chemotherapy options to control the growth of Félix’s tumour. For treating Félix’s cancer, surgery was the only option left for us. As Félix’s tumour was huge and very vascular, he needed a highly specialized surgery,” says Oberoi. “The problem was there are very few institutions in the world that can perform this kind of challenging surgery and have the specialized expertise readily available to help the patient in case there are complications. We needed to find a team that was willing to fight for Félix the same way we were.”

“Félix had the largest tumour I had seen in terms of tumour-to-body ratio. I consulted with several colleagues across North America to see how they might approach it, and several said they wouldn’t attempt surgery,” says Sayed, who specializes in liver and bile duct surgery and liver transplantation and is also an Associate Scientist in the Cell Biology program at SickKids. “On the transplant side, we frequently deal with large challenging tumours, so when Dr. Lorenzo asked me what I thought, I said, ‘I think we can get it out safely.’”

When they found out the surgical team at SickKids was willing to try and remove the tumour, Julie and Paul say they were overjoyed.

Félix’s surgery date was set for Feb. 4 and the family flew to Toronto a week beforehand. However, the planning within SickKids started well in advance. The tumour weighed 1,300 grams, making up approximately 15 per cent of Félix’s total body weight. The surgical team determined which organs would be involved in the surgery, how they would cut the tumour away and how to approach the reconstructions that would have to be done.

The tumour was completely obstructing the vena cava, the main vein responsible for blood return to the heart, leading to engorged veins throughout the abdominal wall as the body tried to re-route circulation around the mass.

Furthermore, the tumour “parasitized” blood vessels from every nearby surface, stealing blood supply to accommodate its rapid growth. As such, from the very initial incision there was potential for serious blood loss from the complex vascular web around the tumour.

The surgical team had to carefully move the tumour off of Félix’s abdominal wall and organs, including his kidneys, liver and bowel, ensuring none of these vital organs were injured but also that all tumour cells were removed. The tumour originally arose from Félix’s bladder, meaning a significant portion would have to be cut away and reconstructed.

Félix pulled through the surgery and at 2:30 p.m. on Feb. 4, Julie and Paul got the call that the tumour was successfully removed.

Félix, Julie and Paul are grateful to be home together again after a long journey

The surgical team was able to remove the entire tumour, but Félix will continue follow up at CancerCare Manitoba and HSC Winnipeg’s Child Health program.

Pictured: Félix on the airplane home.

“Félix has always been smiley and happy despite what he’s been going through. But it was such a relief after the surgery to see he was so much more comfortable, mobile and able to explore his environment similar to other babies his age,” says Julie. “We would like to thank everyone who has supported us through these difficult times, whichever way they were able to. Every act of kindness and support has meant the world to us big or small. We hope Félix’s story can bring some hope to anyone else in a similar situation.” 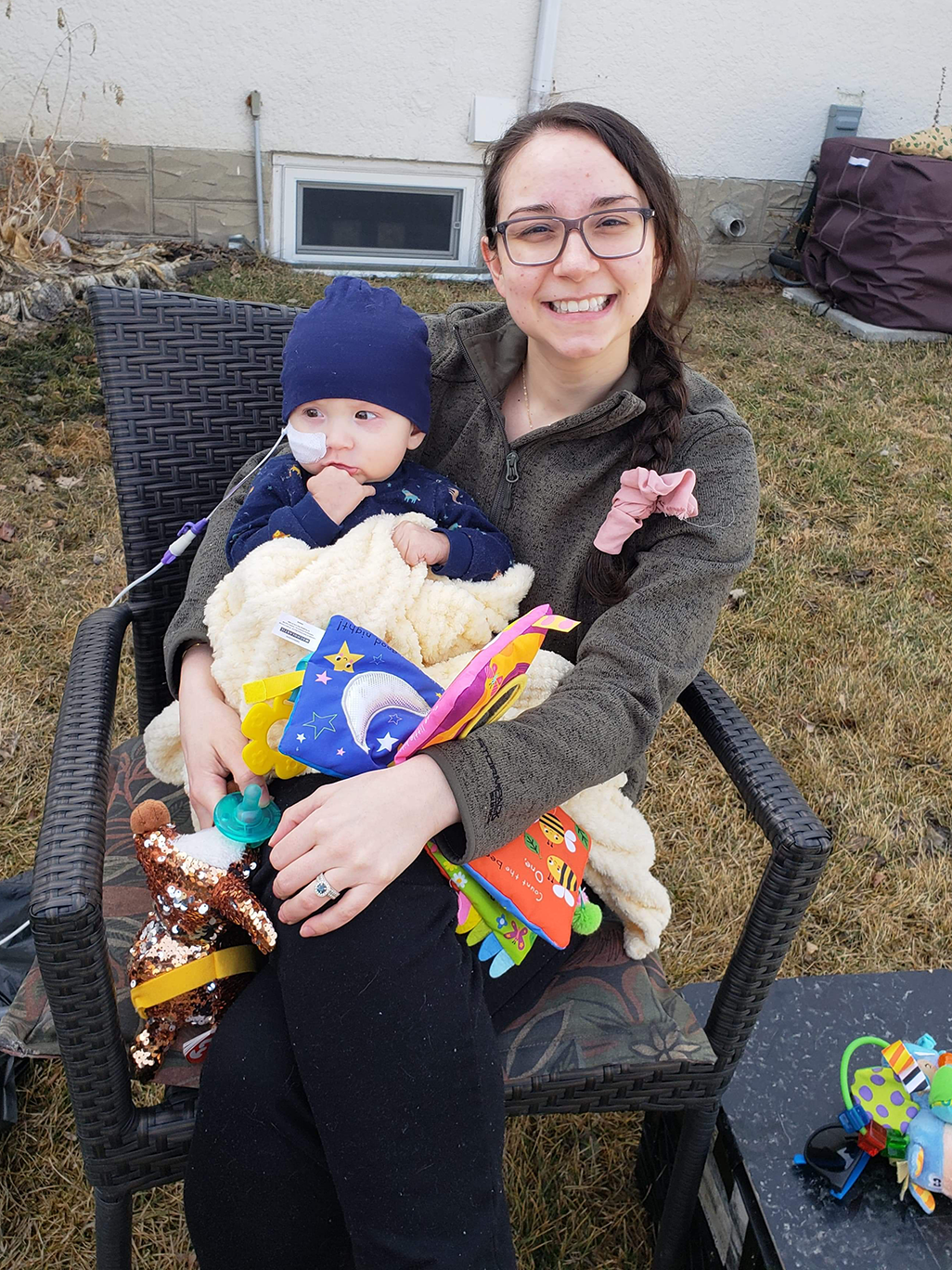 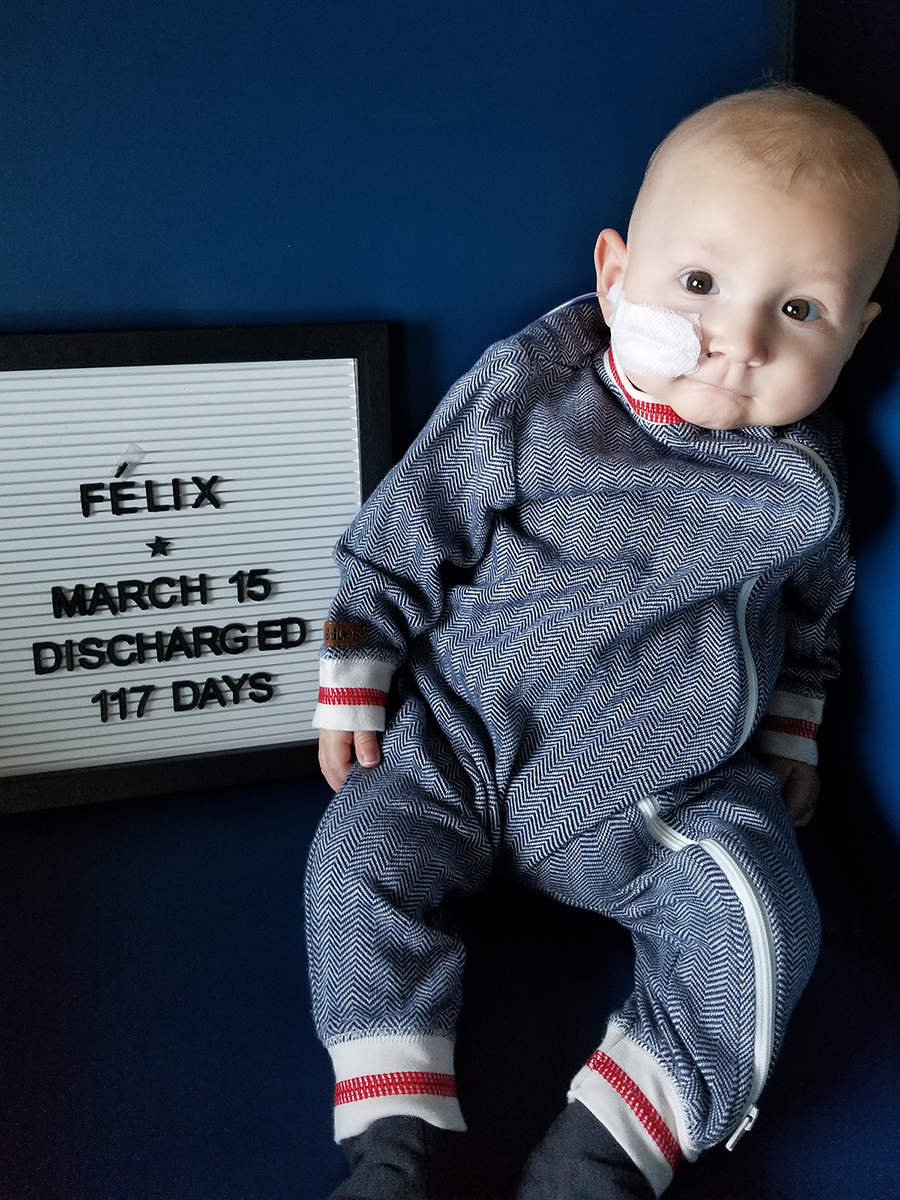